In the days between September 9 and 12, 2009, merely 2 weeks before SiNAPSA Neuroscience Conference 2009 (SNC09), the Polish Neuroscience Society is having its 9th Congress. FENS, a key funding source for this conference, has announced 60 travel stipends for active participation of eligible young scientists. If you are interested and eligible, visit their web site and apply for a stipend. The deadline is February 15, 2009.

In other news, we would like to remind you that SiNAPSA will open its on-line form for abstract submission for SNC09 at the end of January 2009. You are warmly invited to plan to attend SNC09 and to prepare an abstract for early submission.

European Dana Alliance for the Brain (EDAB) has extended an invitation to Nina Mohorko, the Brain Awareness Week (BAW) Project Group Leader in SiNAPSA, to present the Slovene BAW at the EDAB Reception during the FENS Forum in Geneva this July. Nina will be one of only three invited presenters at this Reception, the other two being Mara Dierssen from Barcelona and Jane Haley from Edinburgh.

The invitation is a sign of respect of and support for the work done in SiNAPSA during the last five years in reaching out to the public and actively involving people of all ages and walks of life in the BAW activities.

We are proud of Nina's invitation and congratulate her on it!

However, BAW, like other SiNAPSA projects is a team-work and the recognition Nina and her team are receiving today stems from the systematic and devoted contributions of many members and partners of SiNAPSA over the last five years. Therefore, congratulations and thanks go also to Lilijana Šprah, Mojca Kržan, Jure Bon, Grega Repovš and all other friends and colleagues, whose work can still be appreciated at the SiNAPSA BAW web pages.

The former SiNAPSA president Professor Maja Bresjanac was re-elected as a member of the Central and Eastern Europe Regional Committee (CEERC) of the International Brain Research Organization (IBRO).

IBRO Regional Committees (CEERC for the Central and Eastern Europe) define regional needs and priorities in research and science education. They receive annual budget from IBRO that is used for the organization of activities in that area. CEERC supported three SiNAPSA projects in the past few years – both neuroscience conferences and the Cognitive Neuroscience Summer School.

SiNAPSA is inviting proposals for a new slogan for the upcoming Brain Awareness Week (March 10 - 16, 2008) and other SiNAPSA activities in 2008.

The slogan-printed T-shirts we made in 2004 have almost run out and we are hoping for new ideas to print on T-shirts, maps, notebooks and other material.

Although we are primarily looking for Slovene slogans, we would not pass on a catchy, humorous, brainy idea in English.

Send your suggestions in an e-mail to [email protected] by March 1.

The author of the selected slogan will be awarded with a packet of slogan printed promotional materials and a short announcement on the web pages.

Saddened by the news, we announce that Professor Andrej O. Župančič, the first honorary member of SiNAPSA, died on December 3, 2007. He was 92.

Slovenian neuroscientists of the middle and senior age group are all familiar with Professor Župančič. Most of us have known him as the first Head of the Institute of Pathophysiology of the Faculty of Medicine at the University of Ljubljana. However, his life story is so rich with diverse activities, filled with unexpected turns and outstanding achievements that it would make an engaging reading. He shrugged off suggestions that he should consider writing an autobiography, saying: "Perhaps I'll think about it... when I get old." Indeed, he never did get "old".

His coworkers at the Institute have known him as a charismatic person, a polyhistor and a charming, witty partner in conversation. At the occasion of his 80th birthday and the 50th anniversary of the founding of the Institute for Pathophysiology, we invited him to plant a walnut tree in the small garden behind the Institute. In the 12 years since that day, the tiny plant has grown into a strong tree that is bearing tasty fruit. Professor Župančič observed it proudly when he visited the Institute to give a presentation at his inauguration into the first honorary member of SiNAPSA in January 2005.

For SiNAPSA, it was a true honor to have Professor Župančič accept the invitation to be our first honorary member. He liked the mission and philosophy behind our organisation and hoped to see our efforts bear fruit. At the time, the society was much like the tiny walnut tree he planted years ago. Hopefully, SiNAPSA will grow much the same way like the proud tree. Professor Župančič's contribution to that has been precious and is warmly appreciated. 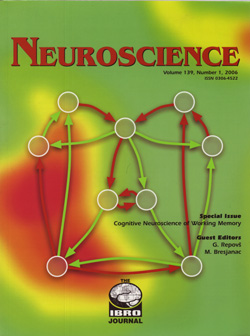 Journal Neuroscience has published a special issue dedicated to Cognitive Neuroscience of Working Memory. The issue gathers contributions by leading researchers of working memory and presents a complex overview of theoretical frameworks, methodological approaches and empirical findings in the field of working memory. One of the basic aims of the issue has been to promote multidisciplinary collaboration between cognitive psychology, neuropsychology and neuropsychiatry, neurophysiology, neurobiology, neuropharmacology and computational neuroscience in the study of complex cognitive processes.

The issue, edited by Grega Repovš and Maja Bresjanac, represents an offspring of the highly successful Summer School on Cognitive Neuroscience of Working Memory, Memos 04, organized by Sinapsa. Detailed information about the special issue including abstracts is available on Summer school pages. The publication of the issue was accompanied by a short presentation by Washington University in Saint Louis, the current research address for one of the guest editors.

The special issue is a valuable achievement for the guest editors, for SiNAPSA, and for the Slovenian cognitive neuroscience. It also illustrates the success of the Memos 04 project: the papers published in the special issue include several Summer School faculty reviews and a few empirical papers born out of the interactions between the faculty and students.

Eva Žerovnik has submitted a note on a postdoctoral research associate position at the Autism Research Centre (ARC) of the University of Cambridge.

The ARC has a particular interest in the neuro-anatomic, genetic, cognitive and endocrine processes that can result in autism and Asperger Syndrome.

More information is provided in the attachment.

On January 12, 2006 SiNAPSA held its annual general assembly, carried out the elections, updated the society bylaws, reviewed last year's work and the plans for 2006. The full account of the assembly will be presented in the minutes soon to appear on these pages.

For now, a short note on the more relaxed second part of the meeting: a lottery awarded several participants with note-pads, folders, ball-point pens and SiNAPSA T-shirts. Almost at the very end the first prize was drawn: a travel grant for active participation at a neuroscience meeting of candidate's choice up to 666 Euro.

The Luck picked JB! While the full identity of the winner shall not be revealed, the Luck should be commended for its "choice" - JB has given a most substantial contribution to the successful work of SiNAPSA in 2005. Congratulations!

Pavel M. Balaban, Professor and Head of the Laboratory of Cellular Neurobiology of Learning at the Institute of Higher Nervous Activity and Neurophysiology of the Russian Academy of Sciences, has been elected Chair of IBRO?s Central and Eastern Europe Committee (CEERC). He will take over from Leszek Kaczmarek, Professor and Head of the Department of Molecular and Cellular Neurobiology, Nencki Institute, Warsaw, Poland, on 11 November 2005 after the meeting of IBRO?s Executive Committee in Washington, DC.

CEERC IBRO, innitially run by prof. dr. Tamas Freund and subsequently by prof. dr. Leszek Kaczmarek has been the major external source of encouragement and financial support for SiNAPSA and it facilitated the successful realization of all our projects since the establishment of SiNAPSA in 2003.

We wish all the best to Dr. Kaczmarek in his new endeavors and hope to have a very fruitful relation also with prof. dr. Balaban.

Role of brain research for the quality of life of an individual and the society is the title and topic of a roundtable discussion, scheduled for November 18, 2005, at 7 p.m., at the Medical Faculty in Ljubljana.

An EEG study showed that meditation significantly increases synchronicity in neural firing between frontal and parietal brain regions. The synchronisation reflects the specific mental activity during the meditation which can be the basis of short-term and long-term changes in the neuronal system. Similar findings could help us understand some of the ancient wisdoms better.

A study in which the participants assessed the emotional state of individuals expressing either congruent or incongruent facial and bodily emotional expressions revealed a dominance of body posture in assessing emotional states. Interestingly, the integration of information from both sources occurs as early as 115 ms since the presentation of the stimulus.

Development of new technologies allows research of virtual brain injury. The authors of a recent study used transcranial magnetic stimulation (TMS) to temporarily disable the function of the primary visual cortex and generate the phenomenon of blindsight.

Mechanical injury of nervous tissue is frequently followed by inflammation, which is one of the main causes of secondary injury. A study tested the protective effects of two substances, used in clinical studies of neuronal injury due to their antiinflammatory effects, and revealed negative effects of joint use of both substances, erythropoietin and methyprednisolone sodium succinate.

although our largest project ended back in July, The Summer School on Cognitive Neuroscience of Working Memory and its "satellite", Symposium on Memory, have received some recent media attention.

In case you missed the published texts in the daily newspapers, you can look at the following links for the interview with Prof. Dr. Alan Baddley, "the Father" of working memory in Delo, and find out what was reported about the School, Symposium and Prof. Baddeley in Večer.